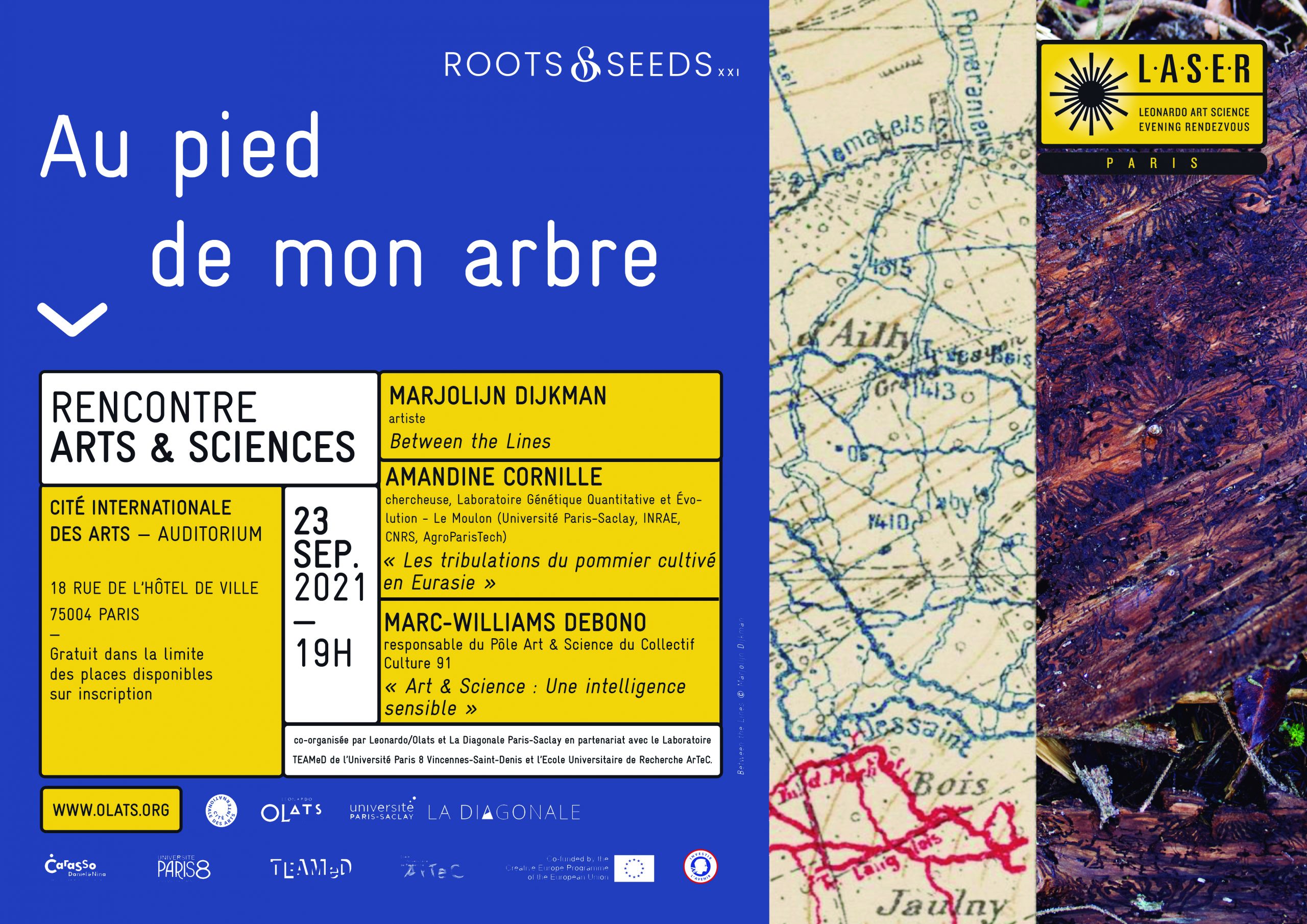 Some species are more attractive to us than others. Whether we like it or not, we have a hierachy of the Living. Until recently, animals took precedence over plants. Today plants have reclaimed their place and are at the heart of innumerable scientific researches, artistic creations, discourses and theories. Some, however, are more desirable to us than others. The Tree is one of those emblematic plants that we are highly attracted to. It is one of the common threads of this LASER Meeting which is part of the European project Roots & Seeds XXI. Biodiversity crisis and plant resistance of which Leonardo / Olats is a partner.

Wearing a mask and sanitary pass are mandatory (an ID may be requested).

LASER Paris takes place in French but Marjolijn Dijkman presentation is in English (not translated).

> Amandine Cornille, Researcher laboratory "Quantitative Genetics and Evolution" - Le Moulon" (University Paris-Saclay - INRAE - CNRS - AgroParisTech) // "The Travel of a Tree" about the research The tribulations of the apple tree cultivated in Eurasia: a complex history of domestication and towards a reasoned conservation of its wild relatives.

In the beginning was the apple. Ours, those that we find in the markets and in our stores, are the distant descendants of the same species of apple tree native to far away Asia. From wild, it became domestic and multiplied its varieties, helped in this by generations of humans. Domesticated and wild apple trees now face new threats.

Amandine Cornille and her team combine laboratory experimentation, field experiments, as well as genomics and population genetics to understand the impact of climate change and the emergence of new pests on fruit trees. This research aims at the reasoned conservation of wild species related to domesticated fruit trees, in particular through a conservatory, experimental and educational orchard of wild apple trees on the Saclay plateau.

> Marjolijn Dijkman Artist // "Disappearance" about the project Between the Lines (Presentation in English, not translated)

There are traumatized lands, in which the violence of humans between themselves is inscribed. Eastern France and its war fronts is one of them, which still contains a toxic arsenal. The pine forests that were planted there after the First World War as compensation and to neutralize a territory that had become dangerous are now subject to the combined effects of climate change and the attack of an insect (Ips Typographus) which destroy them. With Between the Lines, Marjolijn Dijkman combines field research, data analysis, biotechnology and research for a vaccine against the disease caused by the insect, and artificial intelligence to draw the monumental outlines of the impact of climate change and the beetle on the pine forests in the disrupted landscapes of the 'Red Zone' of North-East France.

> Marc-Williams Debono, Neuroscientist, in charge of the Art & Science Section of the Collectif Culture 91 // "Relation" around the topic Art & Science : A Sensitive intelligence.

Relation between plants of the same species, between plants of different species, between different species. Living beings never exist alone and all living beings have the means to apprehend, perceive, interpret and act on / in their environment, with "others". Science opens up to another understanding of plants and art approaches plants in a thousand other ways than the canonical botanical illustration. The two enrich each other.

Based on scientific observations and his research on the electrogenic and cognitive nature of the relations between plants and the environment as well as on his experience of art-science collaborations and projects, Marc-Williams Debono questions the role of relational intelligences and the return of the sensitive to contemporary transdisciplinary practices in art & science, as well as the cultural mutations they generate. 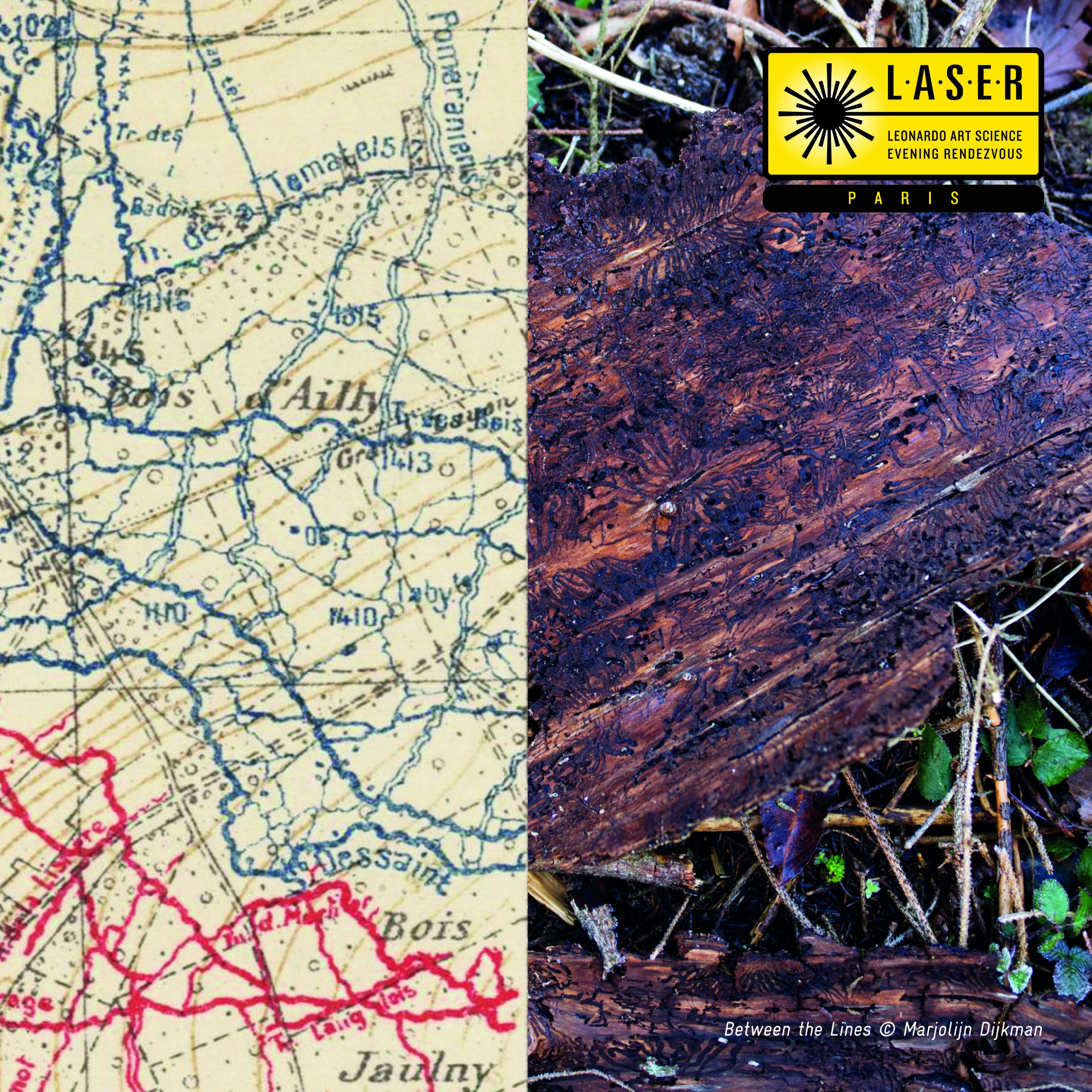 "Next To My Tree ..." LASER Paris Meeting
IS AN EVENT
ORGANISED BY
LEONARDO/OLATS

Initiated by Leonardo/ISAST, LASER (Leonardo Art Science Evening Rendez-vous) is the sharing of experiences about art-science projects in semi-formal meetings outside the institutional format.

The LASER Paris Meeting of September 23rd 2021 is co-organized by Leonardo/Olats and La Diagonale Paris-Saclay with the support of the Daniel and Nina Carasso Foundation and the Creative Europe Programme of the Eurpean Union, in collaboration with the Cité internationale des arts and the Laboratory TEAMeD of Paris 8 Vincennes-Saint-Denis University and the Research University School ArTeC.

The LASER Paris Meeting of September 23rd 2021 is organised as part of the "Roots & Seeds XXI. Biodiversity crisis and plant resistance" project and receives as such a support from the Creative Europe progamme of the European Union.